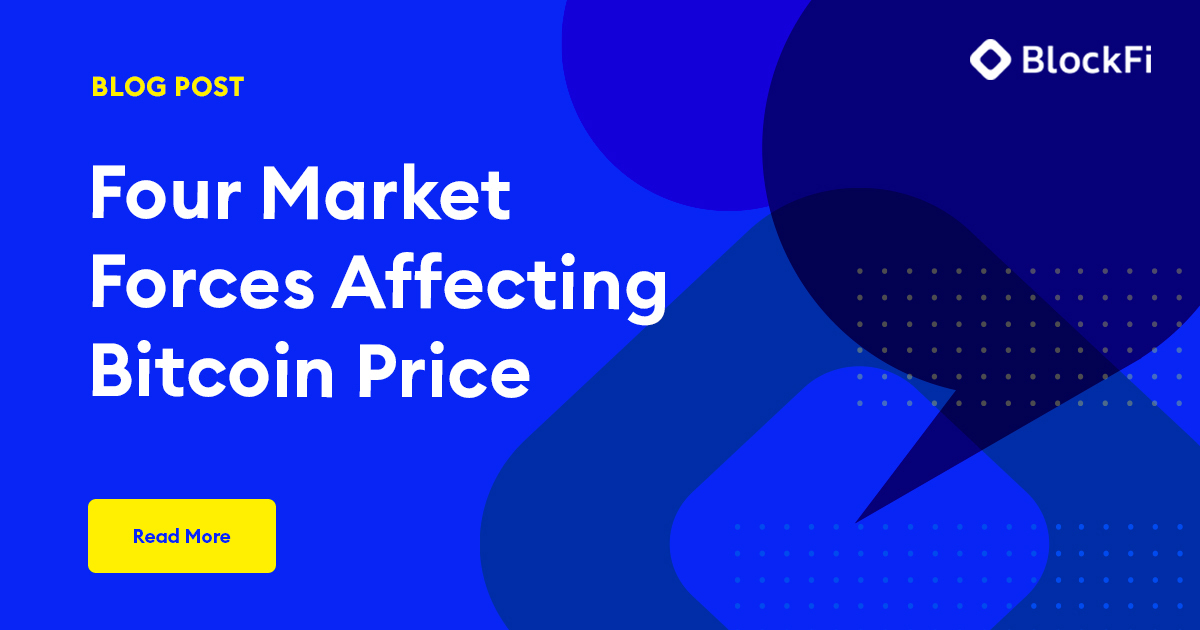 In its relatively short lifespan, Bitcoin has been heralded as the future of digital currency and the blueprint for innovation in financial systems. Bitcoin, however, is not above the rules of basic economics. It still operates within an established framework of supply and demand, and that’s one of the reasons Bitcoin’s price has skyrocketed to nearly $60,000 at the time of writing. Demand has surged, from both retail and institutional investors, and since the supply is limited, the price has surged along with demand.
As Jason Deane, an analyst from London’s Quantum Economics said, “Bitcoin’s growth can be explained by simple economics. Since the supply side of the equation is fixed and demand continues to increase, the result is predictable and obvious.”
But it’s not always that simple. Yes, supply and demand is the main driver behind Bitcoin’s monumental surge, but there are other factors that have contributed to Bitcoin’s surge. Let’s look at four of these key factors to explain why Bitcoin’s bull run is so important to cryptocurrency as a whole, and why it’s different from the bull run in 2017.

MicroStrategy, the largest independent publicly-traded business intelligence company, purchased approximately 19,452 Bitcoins in February, bringing its total holdings to approximately 90,531 Bitcoins. When the company’s stock subsequently soared to over $1,300 from its usual trading price of around $100, the jump was described as the “Bitcoin Effect.” In October, Square, Inc. purchased 4,709 bitcoins for “an aggregate purchase price of $50 million.” At the time, that purchase was equal to approximately 1% of company assets. The company went on to purchase an additional $170 million worth of Bitcoin, revealed in its fiscal fourth-quarter financial report. And in February, Tesla made a splash by buying $1.5 billion in Bitcoin and announcing their plan to accept Bitcoin as payment.
Widespread institutional adoption creates a shortage of Bitcoin available in circulation. On-chain analysis shows that Bitcoin’s circulating supply continues to decline. The co-creator of Glassnode, an on-chain data and intelligence platform, wrote on Twitter that “[d]espite recent volatility, #Bitcoin supply is still drying up at astonishing rates for this time around in the cycle.” 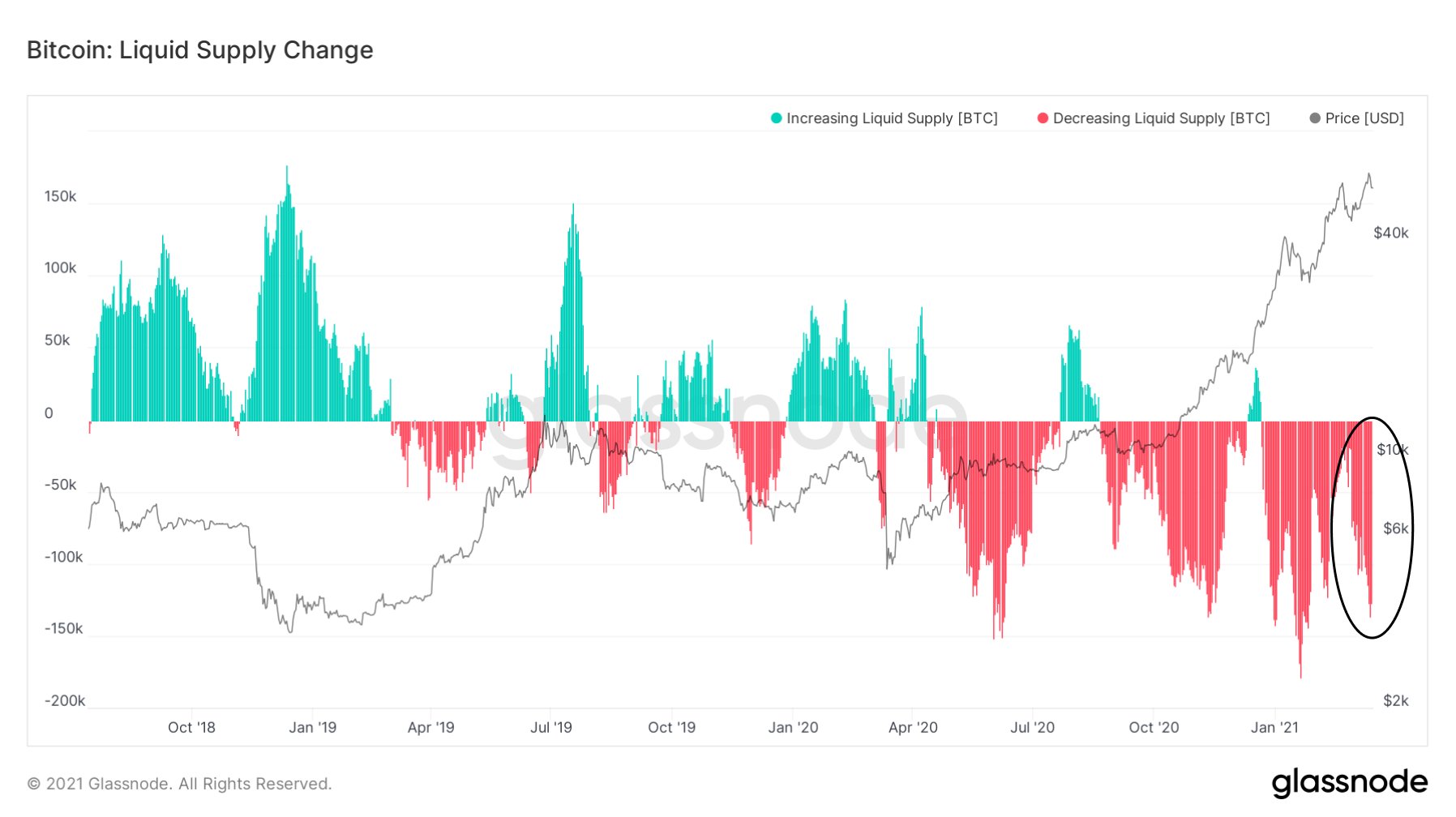 In the early days, the process for buying Bitcoin was more time-consuming. It involved person-to-person meetups, sending cash to individuals with the promise of receiving Bitcoin, or even mining Bitcoin directly. But now we’ve entered what could be called a “golden age” of Bitcoin⁠—it can be bought and sold online in an instant, traded for a multitude of other cryptocurrencies, or used in online transactions.
Traditional FinTech companies like PayPal, and Square, in addition to crypto native companies like Coinbase and BlockFi, have increased Bitcoin’s accessibility to the point that average consumers can easily purchase, manage and secure their own with the tap of a button.
Companies like Morgan Stanley and Bank of New York MellonCorp. (BNY) have announced plans to offer access to Bitcoin to some of their wealthier clients and wealth managers. Morgan Stanley is only offering access to BTC to clients who have “at least $2 million in assets held by the firm,” per CNBC.
This new level of accessibility supports higher demand. The Bitcoin market is no longer dominated by investors with a deep knowledge of the blockchain, but instead available to the general public. The ability for so many people to access the market means Bitcoin is more liquid, more frequently exchanged, and demand is more likely to spike.

Bitcoin halves every 210,000 blocks mined, or about every four years, and it halved for the third time in May 2020. This cut the mining rewards from 12.5 BTC to 6.25 BTC for every data block mined. Around the time of the halving, Bitcoin’s price hovered between $8,000 and $10,000. Its price began to truly spike in October 2020 and through the remainder of the year. What’s notable about this third halving is that it occurred during the height of the coronavirus pandemic and amidst considerable institutional adoption and widening accessibility. As demand rose for Bitcoin from both institutional and retail investors, and new points of entry to the market were opened, the new supply of bitcoin slowed considerably.

Public opinion, especially the views of prominent tech and financial figures, play an important role in Bitcoin’s price. Elon Musk, with over 50 million followers on Twitter, has directly impacted bitcoin’s price by publicly declaring his admiration for the currency and announcing that Tesla accepts Bitcoin as payment. In late January, the tech CEO changed his Twitter bio to, simply, #bitcoin. As a result, the price of bitcoin rose nearly 20 percent in a matter of hours. The Blockchain Research Lab even tracked Musk’s effect on the price of Bitcoin and confirmed that his Twitter presence greatly influenced price fluctuations across the crypto markets.
In addition to Musk, we’ve seen other influential business leaders change their stance on Bitcoin. JPMorgan Chase’s CEO, Jamie Dimon, called Bitcoin a “fraud” back in 2017, but in 2020, his company approved banking accounts for Coinbase and Gemini. Hedge fund billionaire Stanley Druckenmiller revealed in 2020 that he believes his Bitcoin holdings are more promising than his holdings in gold. That was a pretty stark reversal of his comments in 2018 when he said he “didn’t want to own Bitcoin.”
And it’s not only wealthy investors embracing Bitcoin⁠—communities like r/bitcoin on Reddit have increased their subscriber count by 158 percent since March 2019. The online enthusiasm supports the rise in price and follows the deep investments that wealthy institutions are making in Bitcoin. The rapid market impact from outside influences, like Musk’s comments and pivots from influential business leaders, show we are still in the early stages of large-scale Bitcoin adoption.

When the price of Bitcoin boomed in 2017—rising to nearly $20,000 in December after starting the year below $1,000—it became a widespread talking point in the mainstream media. Speculative retail interest surged and investors flocked to buy Bitcoin at unprecedented levels. But the excitement faded quickly and Bitcoin shed 50 percent of its value by January 2018.
Already, we can see a stark difference between then and now. Bitcoin’s value has held above $20,000 since December 2020. New investors, who did not hold Bitcoin in 2017, continue to buy it, institutions continue to invest in it, public figures continue to endorse it, and accessibility continues to increase. In other words, the horizon for Bitcoin--and the cryptocurrency market as a whole--keeps getting brighter.