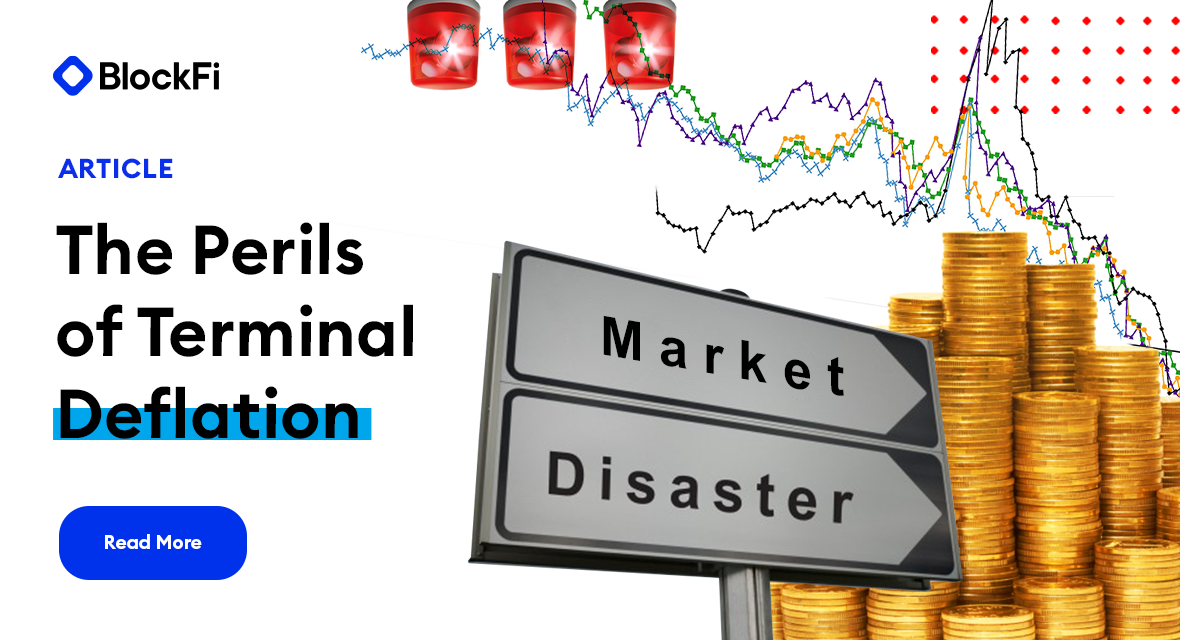 The Future of Crypto

The Perils of Terminal Deflation

During times of crisis, the federal government tends to go on a spending spree. The US Federal Reserve and the Treasury Department are currently working to pump an estimated $6 trillion into the economy. Historically, modifying the monetary supply to such a drastic degree yields inflationary results, but conditions today might actually be worse—with consumer spending down and wages on the decline, we’re running a severe risk of reaching terminal deflation. But there’s one possible cure for this economic paralysis right in front of us: cryptocurrency.

For decades now, the US government has responded to economic downturns with a loose monetary policy intended to stimulate the economy back into action. The main mechanism for doing so? Printing and injecting more money into the system. This approach has staved off the most painful symptoms of economic contraction, but at a steep price.
In periods of economic struggle, zombie companies—those with bad debts and unhealthy balance sheets—must be weeded out in a form of capitalist self-correction. Stimulus spending, however, allows those companies to survive and make the eventual reckoning much worse.
After kicking the can down the road for a generation, has the can grown too large to budge?

What we may be seeing in 2020 is an economy that’s become non-responsive to a massive injection of economic stimulus. A heinous feedback loop may be at work. Older companies that have survived on stimulus injections for generations are filing for bankruptcy, banks that loaned them money are writing off the debts, and to shore up their own finances, they’re tightening credit access for other businesses, thus affecting companies who rely on those loans and may find themselves underwater as well.
The end result is often lay-offs and defaults. Across the entire economy, these ripples add up to a vortex—a deflationary spiral that can sink growth at the critical moment when we need it most.

When a company receives a bank loan, it typically uses that money to fund its operations and disperse the dollars into the broader economy. Simultaneously, the net amount of the loan remains on the bank’s balance sheet and counts as an asset waiting to be returned. In fact, the moment the loan is made, the dollars involved are doubled. This lending system is the backbone of global finance—when it works.
When it doesn’t work and the borrower is forced into bankruptcy and or loan default, the bank must write off the asset, jeopardizing its own financial health and decreasing the total number of dollars in the global system. The value of each individual remaining dollar grows as a percentage of the total supply.
Simultaneously, bankruptcies lead to the loss of jobs, while other companies, seeing their own futures grow dimmer in a deflationary spiral, proactively lay off workers to defray their own future losses. The newly unemployed, along with those who fear income loss or reduction, tighten up their spending, which decreases the demand for goods and services across the economy and leads companies to lower their prices to compensate for weak demand. The net result drives up the value of the dollar amidst falling prices, at least until they’re low enough to induce spending once again.
The danger is all this derives from the entire system depending on debt-generated growth. In the previous 20 years, $185 trillion in newly issued debt created $46 trillion of growth: for every $4 borrowed only $1 dollar was made. And every time a crisis came along, more debt was created to cover it up.

With the unprecedented threat to the global economy presented by COVID-19, governments across the globe have injected gargantuan stimuli into their economies to stave off this deflationary spiral, with more than $20 trillion already added and trillions more on the way. The US government printed more money in June than it did in the first 200 years of its existence.
It’s impossible to print this much money without risk. Print too much and there’s a danger of catastrophic inflation. Print just the right amount and there are still two enormous challenges. First, governments lack efficient and honest methods of distribution of stimulus funds. Lobbyists and special interests tend to disproportionately direct money into the financial system itself to keep it afloat. Additionally, since the top 1% of American households hold 50% of all stock, even when stimulus money is distributed more widely among businesses and corporations, it ultimately only benefits that 1% and exacerbates wealth inequality, a recipe for social unrest.
Second, no amount of stimulus alters the behavioral patterns caused by high unemployment. When people lose their jobs, they spend less money, and a debt-based consumer economy relies on spending, often on the thinnest of margins. Any drop in revenue can shutter countless businesses and drive a deflationary spiral.
On the other hand, printing too much money runs the risk of social unrest. There’s no easy solution here: too little can trigger a deflationary spiral that sets ablaze a half-century of bad debt, while printing the “right amount” still creates inefficiency of distribution and behavioral changes that lead to deflation anyway.

Could Crypto Be the Cure?

As we’ve seen, printing too much money runs the risk of social unrest, printing too little can trigger a deflationary spiral that sets ablaze a half-century of bad debt, while printing the “right amount” still creates inefficiency of distribution and behavioral changes that lead to deflation anyway.
So what kind of solutions should we consider when facing these perilous economic conditions?
Cryptocurrency offers an off-ramp. Created in direct response to the stimulus following the 2008 financial crisis, Bitcoin is a digital currency whose supply is hard-capped. There won’t ever be more than 21 million Bitcoin.
At the very point when government-backed currency nears an inflection point that may presage total collapse, crypto offers an alternative to the cycle of printing and injecting cash into the global supply, while also providing a hedge against the loss of faith in governments, national currencies, and traditional financial institutions. That’s why Paul Tudor Jones, a legendary Wall Street icon, characterized Bitcoin as the “fastest horse” in the investment landscape over the coming decade. Perhaps it’s time more people, and governments, paid attention.
Fortunately, companies like BlockFi are spearheading mainstream adoption of cryptocurrency, even in the midst of economic turmoil. We make it easy to invest and earn with crypto assets, no matter what tomorrow might bring.